I waited 4 hours for these to come out... hung out in a convenience store and cleaned and organized my car, chatted with folks at home who were just waking up... basically was quite bored for a while, but worth it! 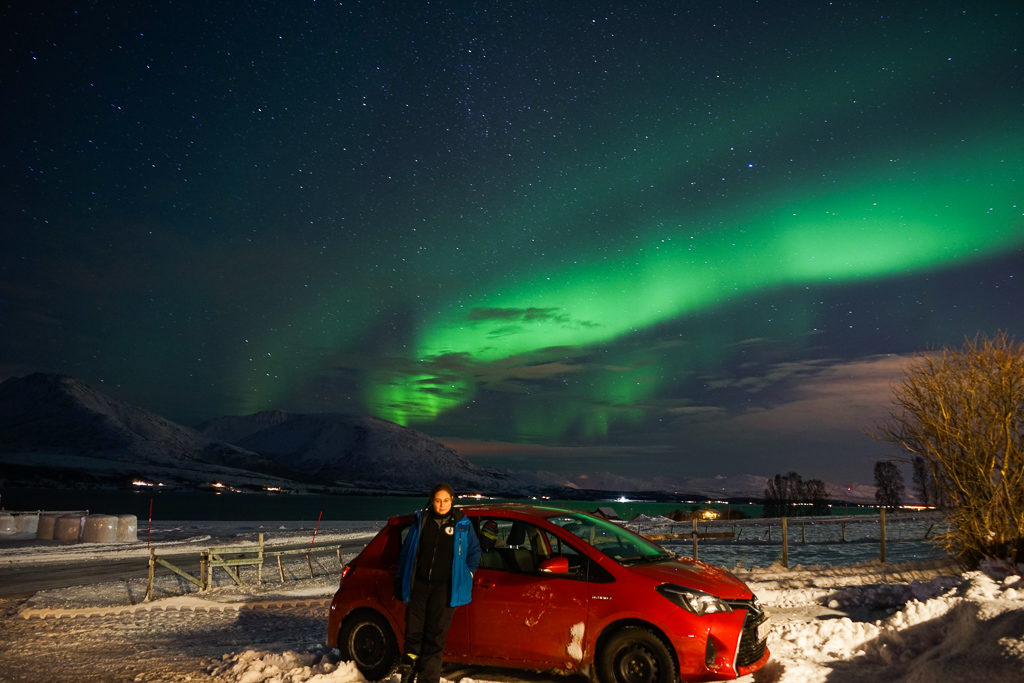 The intrepid adventurer with her Norwegian rental car!

One of my current passions is to find and photograph the Northern Lights! I traveled to Iceland in 2016 and northern Norway/Finland in 2017 to do this.

In order to see the northern lights, you need a few things:

2. To be far enough north that they are visible

3. Ideally, active aurora, because those are much more interesting to watch

Things that surprise me about the Aurora:

Auroras look really different to the naked eye than they do to the camera. Ones that are not particularly impressive to the naked eye turn into splendid photographs with longer exposures. This is especially true of color… most auroras I’ve seen seem mostly white, maybe a bit yellow or green, with hints of purple that are so faint I think it might be wishful thinking. In my photographs, however, more colors are visible, especially when you use photoshop to bring them out. (I don’t really like photoshopping my pictures, so most of my photos here are what my camera sees without any help.

Auroras change from second to second. They could be near invisible one minute, and bright a few minutes later. They come and go, they dance and flicker and flow across the sky.

The sky in northern parts of the world usually has a faint green glow if you take a long exposure .

You need mostly clear skies to get a good view of the Aurora, as they are in the upper atmosphere, above the clouds. I find that each country has its own weather maps that can be used to predict.

And the fun part – getting to your clear sky:

The aurora are usually not so bright as to be able to overcome city lights, so your best bet to see them is to get out of the city. In places where aurora are common, there are a LOT of tours that will load you on a bus and take you somewhere dark. Those are always an option, but with maps and a knowledge of when your aurora are going to be strong a rental car and google maps can be just as good (and no crowds!)

On my trip to Norway in 2017, the forecast predicted Kp6 for the day after I arrived, but all the weather maps said it would be cloudy near where I was staying in Tromso, and all of the surrounding region. I weighed my options, decided I really wanted to see if I could see this solar storm, so I studied the cloud cover maps carefully, saw that there might be an opening in the clouds near Kautokeino and planned a little road trip to go there. It was 7-8 hours of driving each way, and I got to drive through Finland! (Did you know that Finland is in a different timezone from Norway, and it is very confusing to drive through it when your phone updates time automatically.) I saw the Aurora, it was really nice, and I got to experience Norwegian and Finnish Lapland (beautiful!), -25C temperatures, and my very first flat tire.