Adventures in Iceland – both on and off the beaten path!

I drove highway 1 around Iceland in November-December 2016. This was my first solo road trip, my first time driving in winter conditions, and my first time to northern latitudes! I started the trip nervous about driving and extremely unsure about whether the trip was  a good idea. I had planned out some of the trip in advance, booked most places to stay via booking.com and AirBnB (with some flexibility at the end of the trip because I had no idea what to do after Akureyri.) These are some photos and thoughts from the journey (no editing!)

1. Driving in Iceland in the winter!

This was definitely the most intimidating part of the trip planning. I almost backed out and signed up for a guided tour instead, but those were expensive and didn’t do all the things I wanted to do. I booked through Orange Car Rental, and I got a decent deal on my little Nissan Micra. All rental cars in the winter have “winter tires” AKA studded tires, and those make a huge difference in road traction. I definitely found myself driving on packed snow/ice without slipping. I found the website www.road.is to be very helpful to keep me updated on road conditions/hazards. They even have a video for new drivers in Iceland! I didn’t need it, but always good to know that the emergency number is 112. Be aware that not every road in Iceland is paved. There are parts of highway 1 that aren’t paved, and Google maps does not specify whether or not the road is paved. If it gives you a slow travel estimate on your route, this might be because the road isn’t paved! Another hazard to be aware of in Iceland is wind… especially to the west, high winds can be dangerous. Advice I got from one of my AirBnB hosts is if it’s really really windy, don’t drive… or if you have to drive, stay in the middle of the road because it is harder for the wind to get under your car and flip it. In the winter, especially outside of the south/west of the island, there isn’t a ton of traffic and you sometimes might end up driving in the middle of the road to give yourself a larger margin of error as there’s not much by way of shoulders on the roads and speed limits are low. Also, beware of single lane bridges, and be polite to drivers coming in the other direction! In the north, there are also some single lane tunnels, where traffic heading in one direction is expected to pull off into one of the frequent pull-offs to allow traffic in the other direction to pass.

Somewhere between Hofn and Djupivogur

Me and my trusty Nissan Micra! 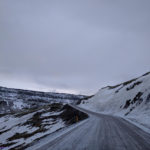 Contrary to its name, coastal Iceland in the winter isn’t *that* cold. I might be biased because of -20F Iowa winters… but from what I saw tended to be around -5 to +4 degrees in late November/early December. It was very frequently cloudy, and rained off and on for most of the time I was in the South. Fortunately, I was prepared for the weather with waterproof gear from head to toe.  Waterproof hiking boots, pants, coat were extremely useful, and kept me warm and dry underneath. Air activated hand warmers were nice for prolonged times outside at night (northern lights photography!) My ice spikes made the difference between clinging to a railing to get up/down the stairs at Gullfoss and happily tromping down those stairs without even holding onto the banister.

This is a traditional tourist activity as it is close to Reykjavik and doesn’t take too long to drive. It includes cool places like Thingvellir national park, Geysir geothermal area, Gullfoss, Kerid Crater, and is near geothermal baths Laugarvatn Fontana and Secret Lagoon.  There are a lot of guides to the Golden Circle, so instead of writing a mediocre version, I shall link to a few. Link! Link! Link!

Iceland has some splendid waterfalls! (Essential Icelandic: “Foss = waterfall.” Here’s a bunch that I visited:

Gulfoss – Conveniently located on the Golden Circle!
Seljalandsfoss – take the time to walk past the one all the tourists are at to look at the next few waterfalls too! There’s a spiffy hidden one called Gljufrabui less than 1km down the trail. Bring waterproof gear, as the grotto where the waterfall is is very very wet and you have to walk through the stream to get into the grotto (secret tip – there’s a path of stones to the right that you can step on – my feet stayed dry in ankle high waterproof boots.)
Skogafoss – There’s a fried fish stand near here that is so good! Great reward after climbing up the 17 stories of stairs to get to the top viewpoint!
Dettifoss – This one is further from the parking lot than the others listed – this was a very icy hike (thank you, ice spikes) through some deep snow. I wish I had brought my trekking poles with me for this hike!
Godafoss – No railings! Very different from what you would see in America.
Hraunfossar/Barnafoss – This one is cool because the water kinda seeps out of the rocks; it’s not a river going over a cliff!
Alafoss – Ok, so this one’s not an epic waterfall, but rather an epic yarn store. Get lopi in every color! 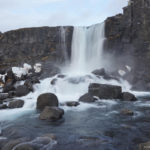 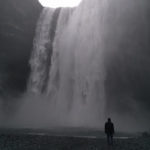 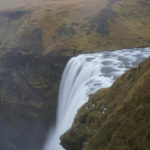 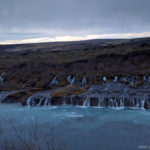 This was the pinnacle of my cold, wet, and happy adventures in the south of Iceland. Every inch of my clothing was wet, but I didn’t care because it was waterproof and the scenery was absolutely gorgeous in a stark and violent way. The ocean here is powerful, with churning waves washing up onto the shore (and signs warning tourists to not turn their back to the sea because people have died.) You know it has to be pretty bad when there’s a sign! 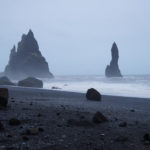 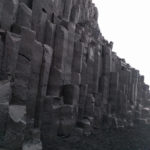 Expensive, but worth it! I took a 5 hour glacier hike with Arctic Adventures on the Falljokull glacier and an ice cave tour also with Arctic Adventures. There were so many amazing shades of blue to the ice, from clear to deepest blue. No photography can truly do it justice! (Didn’t stop me from taking a ton of pictures!) 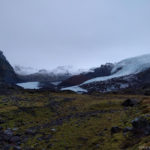 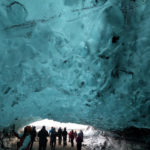 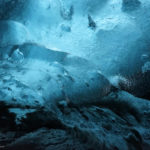 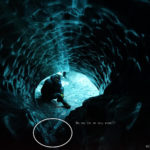 This is one of my favorite places in Iceland! I spent a lot of time photographing the icebergs in the lagoon and large chunks of ice that washed up on Diamond Beach. In the hours that I spent, I watched the light change as the sun set, and we got every color of light from white to gold to pink to purple to blue…  Beautiful nature with a convenient bathroom! Everyone wins! 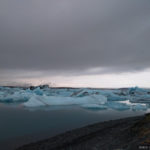 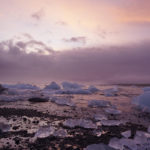 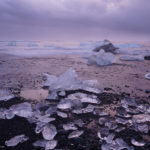 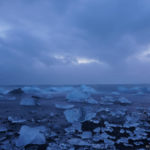 8. The cliffs between Hofn and Egilsstadir

Gorgeous scenery, fjords, cliffs, ocean… so nice! Parts of the road here are not paved. The rental car company told me specifically to avoid road 939 through the mountains to Egilsstadir … but when presented with the option of driving around more fjords and taking the shortcut, I opted for the latter. It had a big sign saying “not maintained in the winter, you’re on your own if something goes wrong up here” “17% grade.” They didn’t mention that the road was unpaved, parts were solid ice, and there was a cliff off to one side with no guard rails. I drove slowly and learned a lot about the many virtues of studded tires and staying calm.

9. The area around Myvatn

I love this area because it is a hot geothermal area! The volcano Krafla is nearby, and there’s a lot of geothermal power plants. The milky blue waters of the thermal lakes here is gorgeous! I enjoyed visiting the geothermal springs in caves (Grjotagja and Storgja) although the waters of Grjotagja were too hot to swim in and on private property where swimming was not allowed. Also went to Myvatn nature baths, which was my favorite thermal spa of the ones I visited. We stayed until closing time and hung out at one of the vents where hot water flowed into the pool. This part of Iceland is less cloudy than the south, and is good for Northern Lights watching. I wish I had spent more time here!

Color other than gray! 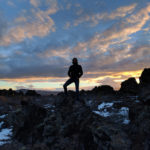 This was extremely scenic, fjords, little towns, and some tunnels through the mountains. I stopped to visit a small cemetery as the sun was setting and took some lovely pictures. Note: parts of this road weren’t paved, but it looks like they’re working on paving it! 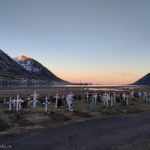 I wanted to do this, but didn’t make a reservation… ended up doing this last minute and had a great time! (I have no equestrian skills, and boy, were my legs sore after a 2 hour ride!) Essential Icelandic: “Ho” = “Whoa”

12. Snaefellsness peninsula and staying at a working farm (and northern lights)

I approached this from the north (bad idea, road 54 isn’t paved, and was more potholes than road!) Saw some lovely scenery, walked to a waterfall, explored the Snaefellsjokul national park with its 800 year old lava flows blanketed with thick green moss. Such a fairytale landscape, all those stories about elves living in the moss… this must surely be the place where they live! There was something magical about the light, the nooks and crannies in the moss, and just being there in those moments. The park boasted some lighthouses and a golden sand beach (special, because most of the beaches in Iceland are black sand.) I stayed overnight at a small farm on the south side of the peninsula, where I got to see a herd of sheep up close and personal and to help feed and milk cows! Later in the night, the northern lights prediction was giving me a KP6, so I took a very spontaneous late night road trip to the only bit of clear sky on the map… and was rewarded with a nice show! 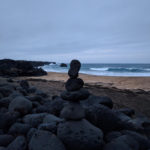 Iceland has some handy northern lights resources:
Verdur.is has a highly useful cloud cover and aurora activity map that is pretty much all you need!
Aurora Service is another helpful resource with links to Ovation predictions and 3 day forecasts for every 3 hours
The University of Alaska 28 day forecast is also handy for getting an idea of what’s going on in the near future

(I wrote a post about finding the Northern Lights!)

Hope you enjoyed some of my adventures in Iceland! Have you had fun in Iceland recently? What are your favorite places?